Skip to main content
From glistening right out of the stream, to drenched in butter and pipian, this trout had a good life

From my view knee deep in the river, real food looked like this: A swift current charged down Utah's Weber, and beyond the stream bright yellow alfalfa, and beyond that a reservoir holding sun-stunned water from the immense snowmelt two seasons ago. It was a blue-ribbon stream, three thousand brown trout per river mile. A teasing impression of plenty.

The drizzly rain made for murky-looking water but what was windowpane clear were the peaks of the Wasatch, a Rocky Mountain sub-range. As well, the flashy noises from magpies doing that magpie thing, wock, wock wock-a-wock, wock, pjur, weer, weer, lending Western authenticity to the place.

I was in Utah but I could've be anywhere, Minnesota, Missouri, because my world was so small, 50 feet by 10 feet — the portion of the river at which I was staring. Sporting waders and standing on slippery rocks in 47-degree water, I was a rookie, hoping for a feeding frenzy, just anything, any indication of a fish.

My guide Wes Bolton was 29 years old, from "redneck Idaho" (his words) and a fisherman since age 6. He was the real deal; I, the imitation. I had never fished for pleasure or purpose. But I had eaten my share of trout — smoked, pecan-crusted, plank-grilled, pan-fried, seafood-stuffed — and had gotten pretty good at searing a fillet in a super hot pan to keep the trout's tender, flaky texture intact. That day I wanted to know how it felt to pull one in at the source.

Browns, originally brought over in the late 1800s by pioneers from the East Coast, were now natural on the Weber. They got along really well on their own, in fact too well. If I didn't help thin out the population of small ones — and take my quota of two under 14 inches — the wildlife resources folks would do it themselves so that other anglers could hook and release the shrewder bigger ones, like the 18-inch trophy trout.

Since trout feed on sub-surface aquatic insects, the legal way to outsmart a fish was with a fly — man-made, fake, whatever you want to call it — that resembled the trout's diet at the time of the year we were fishing.

Wes' fly box dangled from his hip, a Whitman sampler of mayflies, leeches, stoneflies, midges and nymphs, the younger, underwater stage of these same flies. Nymphs have not yet reached the adult, or flying, stage of life. The game of tying flies was to "match the hatch" by making a pattern with found objects — a chicken feather, an ostrich feather, yellow chenille — that was close in size and shape to what they regularly ate. And the flies had names: Pale Morning Dunn; the mid-summer classic caddis pupa; or the sowbug I was casting, Ray Charles. 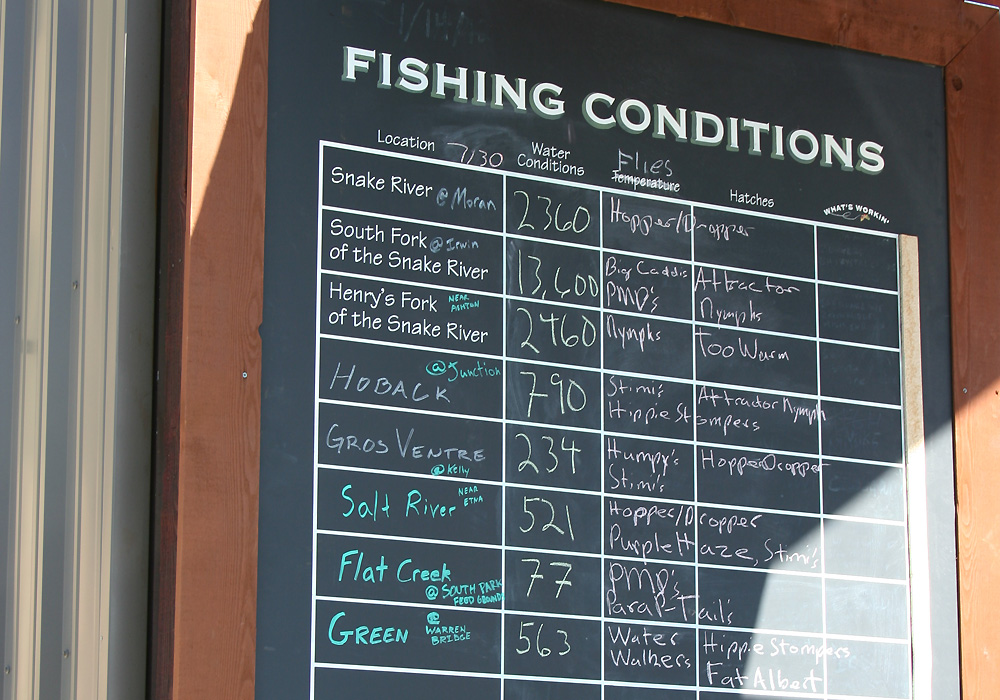 I took all this in and I nodded, the way you do when you hear a foreigner speak and you sort of understand him, but you haven't got it just right.

I got the basic strategy: used a lot of arm motion, threw my cast between 10 o'clock and 2 o'clock and at a 45 degree angle upstream and across the current. Landed it softly so the fish didn't get spooked, then let my fly drift downstream with the current until I felt a tug.

Norman Maclean's words from "A River Runs Through It" rolled through my head, and I imagined myself on Montana's Big Blackfoot River beside him: "It's not fly fishing if you are not looking for answers to questions."

Why was I fishing from under a weeping willow? It was all against me. My line knotted in the broad canopy of the branches overhead. Why was I standing under a willow? Because I thought I could be into the West by settling in near a boulder-lined pool where trout like to slow down, pod up, and hang out. Idiot.

So I hopped further into the stream.

What was wrong with my cast? I tried to follow Wes' elegant, seamless movements, tried to "feel my cast." But my thoughts changed course. Would he be colorful? Hard-fighting? Have scratches and marks on his skin just from living?

Across the fields the sun looked like a huge silver dollar lit up with kerosene. And then, noises in the brush. A coyote sauntered slowly by in all his russet glory, fat with the carrion of summer. He tolerated my presence well enough and continued munching his way across the meadow.

Cast again. Ten-to-two. This was all governed by luck. When that failed, then what? I threw out a Ray Charles and let it drift down over a rock and wham! A take! I had the fish on and it ran hard downstream, cutting at an angle.

Wes fired commands: Hold your tip up! Rod above your head! Don't point it at the fish! Reel in a bit, hold it, a bit more, you got a take, keep the rod up, hang on, don't let out your line, he'll spit out the fly!

Let 'em tire out. There's hard current. It exhausts him. He's heading back to you, lift up the rod, keep the line tight, reel in some line!

And there he was, half out of the water, hanging off my line, an 11-inch brownie, a perfect pan size. He had a jaw that looked like he could've swum downstream with a harmonica in his mouth.

Wes sloshed a few feet upstream and grabbed it into his net.

It was a fleeting moment when my fish, iridescent in the sunlight with candy-colored reds and golds that soon drained away, was pulled from his world to enter mine.

On buying and cooking trout

Look for trout that has a skin that's unblemished, with no stab marks or white spots or discoloration around the head and tail. Also, it should not have blotchy portions of skin. Those are symptoms of distress. If the uncooked meat is soft or translucent, it's too old.

When you handle the fish, the skin should feel slippery. Called a slime coat, it protects trout from parasites. Remove the backbone and the smaller pin bones, the ones that come out sideways.

Cook trout all the way through.

Note: This recipe is from chef Joe Saladyga, owner of Savoury Kitchen, a Park City, Utah, catering company. The wonderful essence of citrus comes through. Leave skin on the fillets because the fattier dark meat near the skin tastes delicious. Also, by leaving the skin on and pan searing, the fillet stays intact.

1. Pour chicken stock and lime juice into a small saucepan. Simmer until liquid is reduced to ½ cup, 10 minutes. Remove saucepan from the heat; whisk in cold butter bit by bit to form a sauce.

2. Brush the flesh side of each fish with ½ teaspoon canola oil. Season fillets with salt and pepper to taste.

3. Smear remaining 1 teaspoon oil in a nonstick pan or cast iron skillet. Heat over medium-high heat; when hot, add the trout, flesh side down. Cook, 45 seconds. Flip carefully; lower the heat to medium-low. Cook until cooked through, 3-5 minutes. (Or, flip the fillet and finish in a 350-degree oven, 8 minutes.)

4. Serve with the sauce and a sprinkle of cilantro.

Note: Adapted from chef Arturo Flores of Park City, Utah's Chimayo restaurant. He dresses the fish with pipian, a piquant Mexican sauce. Epazote is an herb used in Mexican cooking; look for it fresh in Mexican grocery stores, or leave it out.

2. Heat a cast iron skillet; smear ½ to ¾ teaspoon canola oil over bottom of pan. Sear fish on the flesh side, 45 seconds to 1 minute. Flip; season with a little salt and pepper, if you like; press the herb and seed mixture on top to cover the fillets. 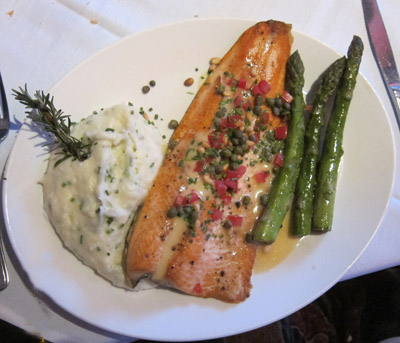 Note: Adapted from Bill Hufferd, chef-owner of Park City's Mustang Restaurant. Utah red trout is another name for rainbow trout. This dish can be served with herb roasted new potatoes and sauteed asparagus.

1. For garnish, combine all the ingredients in a small bowl; set aside.

2. For the trout, brush flesh side of fillets with olive oil; season with the salt and pepper to taste. Heat a large skillet over medium-high heat; smear with remaining 1 teaspoon oil. Add trout fillets, skin side down; cook, about 4 minutes. Flip fillets carefully with a wide spatula; cook until cooked through, 3-4 minutes. Transfer to a serving platter; keep warm.

3. For the sauce, cook shallots in a small saucepan in 2 tablespoons butter. Add lemon juice; heat to a boil. Reduce mixture to a sauce consistency, thick enough to coat the back of a spoon. Reduce heat to low; gradually whisk in bits of butter, whisking after each addition to form an emulsion. Season sauce with the salt and pepper to taste; ladle over trout. Sprinkle garnish over all.

Note: Toast the pine nuts on an ungreased baking sheet in a 350-degree oven until browned, 4-5 minutes.

Peggy Wolff’s stories on what, where, and with whom people eat have appeared in the Chicago Tribune, the Tribune's SUNDAY Magazine, the Los Angeles Times, Orlando Sentinel, and more.  Her new book Fried Walleye and Cherry Pie is a compilation of essays on the subject of midwestern food by the heartland's most reputable authors, radio hosts, food journalists, and chefs who have ever picked up pen and fork. It comes out in November '13

Editor's Book Out Now on Amazon!

Where Do We Go From Here?

Can Technology Save Us? Huh?